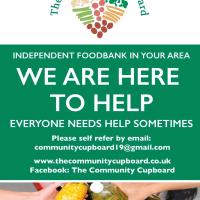 The Community Cupboard was formed following an initial comment of 'I think we need a local Food bank', in response to a local residents plea for help.

It had become apparent that the service was required, but the stigma associated with it meant that people were less likely to admit they needed help or seek it. After a few introductions, many meetings and lots of research,  the trustee team was formed.  We quickly became a registered charity and launched The Community Cupboard.

Kent County Council provided a start up fund, Sevenoaks District Council offered guidance and support and West Kingsdown Parish Council offered premises.  Local businesses, tradesmen and residents all pulled together to offer their help and the hub was transformed from a disused garage to a welcoming space where people could access food, groceries and signposting services over a cup of tea.
More businesses, local schools & doctors surgeries became involved and we quickly joined forces with other local agencies and support services.

By working together, we have ensured that those in need receive the correct support to address ongoing issues

Our ethos has always been that everyone needs a little help sometimes and we aim to ensure that the support we provide allows people to retain their dignity whilst doing so.

Next door to the village hall and by the skate park.

Get directions to TN15 6BZ